Why we’re not implementing one of our most groundbreaking projects this year, and why that might not necessarily be a bad thing.

If you’ve ever been to the Maroon Bells, southwest of Aspen, you’ve seen the photographic subject of probably more postcards from Colorado than any other location. Nestled among these mountains is the headwaters of the beautiful Crystal River. September 2018 Photo of Crystal River taken by Pat McMahon, Board of Directors of Roaring Fork Conservancy

In fact, the Crystal is almost dry in several places. Mother Nature can be cruel, and while some West Slope streams are managing to crawl along even in this historic drought we are experiencing in Western Colorado, the Crystal wasn’t so lucky.

When a river runs dry, whole ecosystems are affected. Fish die, of course, but so can the wildlife that rely on the riverine ecosystem, both on the dry reach itself and downstream, where larger rivers miss crucial flow components and run low. Fish stuck in evaporating pools share diseases and struggle to breathe. Rural communities that depend on agriculture and tourism decline.

The Crystal is surrounded by public land, but much of the land immediately adjacent to the stream consists of private ranches, some of which have been operated for decades if not a century. These are some of the most celebrated agricultural properties anywhere, for their beauty and quintessential Colorado wildness.

One such place, Cold Mountain Ranch, is owned by Bill Fales and Marj Perry.  They have run cattle and grown alfalfa there for decades. Early in 2018, after years of working with partners, pitching projects, and listening to concerns from water rights owners, the Water Trust signed a first-of-its-kind agreement with Bill and Marj. It’s what we call a diversion coordination agreement, also known as an irrigation retiming agreement. Basically, the rancher uses the water they need, but after a certain point in summer (when the river is most vulnerable) they voluntarily shift their irrigation timing, allowing that unused water to proceed downstream in exchange for fair market reimbursement from the Water Trust. And the deal protects the rancher’s water right. 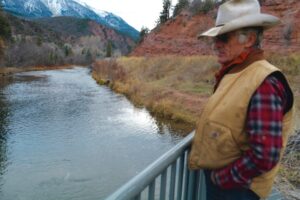 Sarah Tory | Aspen Journalism | Rancher Bill Fales stands next to his headgate on the Crystal River.

Seven months after signing the contract, it became time for Bill and Marj and the Water Trust to decide whether to implement the project this year. Unfortunately, the season had gone very poorly in terms of natural precipitation, and the ranch’s crop was struggling to regrow enough even to shade its roots from the sun. Moreover, the river was running so low that Bill and Marj’s water wasn’t likely enough to help keep the river connected.

Why aren’t we implementing a flow enhancement project in one of the worst drought years in a decade? It’s a fair question, and it gets to the core of what the Water Trust does and how it does it. Long ago, we committed to the idea that we would be partners for water rights owners. We would neither seek involuntary deals nor implement projects when it was not in the water rights owner’s interest. Quite simply, when Bill told us he didn’t think he could implement the split season arrangement in 2018, we understood, and continued our work with community partners to keep working on solutions to help the Crystal River in the future.

We believe – and think it’s been well proven – that there are plenty of wins for the environment out there and available to be negotiated, without forcing water rights owners to act contrary to their interests. Yes it takes a leap of faith sometimes, on both parties’ parts, but as long as there are people like Bill and Marj out there willing to take it, we’ll be right there with them.

We are proud to report that our approach is working. We are continuing to build relationships with water users on rivers in critical need, which support solutions that operate when their water would make the difference between a healthy and unhealthy river. Down the road, we hope more water rights owners on the Crystal River will participate in our program. But the project is brand new and will take time to prove its worth to other water rights owners on the river and elsewhere.

Not running the project this year because the benefit to the river was not sufficient to make it worthwhile for the rancher or the Water Trust is precisely why this model works. It’s why we are the one home-grown nonprofit in Colorado that best understands this long game of engaging everyone in conservation through win-win solutions. It will work if we keep listening to each other and keep working together. Our water future depends on it.